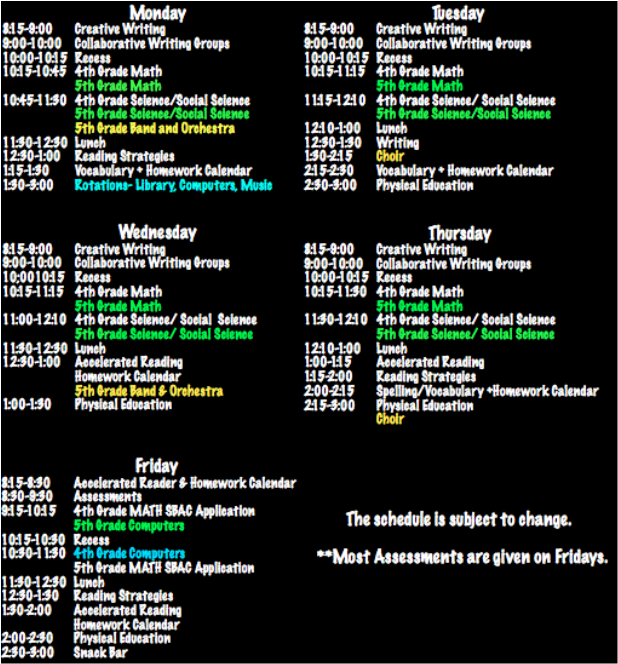 Our dance routine this year is called "The Evolution of Dance." Students will be learning steps to popular songs from the 1970's to the 2000's. I am teaching students to count by sets of 8. They will be graded on participation, effort and proficiency. Every 2-3 weeks students will perform a new portion of the routine in small groups for a PE grade.

Fourth graders should be independently reading increasingly challenging books, such as The Black Stallion, and poems, such as Shel Silverstein's Whatif. They will discover a range of sentence structures and vocabulary words (like descended) that make them flex their reading muscles. As students discuss what they've read, they should be able to point to several examples in the text (also called evidence) to back up their ideas.

Kids need to explain their thinking, use details, and make connections between what they read and what they already know.

Fourth graders begin to make sense of information presented in maps, timelines, and charts in history or science readings. Students are expected to work independently, even on challenging assignments that require research.

At this age, children are also expected to understand some figurative language, such as idioms and expressions that aren't literal. (Example: You’ve lost your mind!)

Fifth graders should be diving into so-called "complex" text with confidence. For example, because of longer sentences and a story that deals with loss, A Wrinkle in Time is considered complex fifth grade fiction. To make sense of new words, kids should look for clues in what they're reading. For example, they might look for a definition within the text or try substituting an easier word that they suspect means the same thing. To help them understand the main idea, fifth graders should look closely at how the material they're reading is organized. They should look at details, too, and think about how those details support the main idea. For example, in a text about Helen Keller dedicating her adult life to helping others, there should be details that help make the main point, like her founding the ACLU and sticking up for people with disabilities.